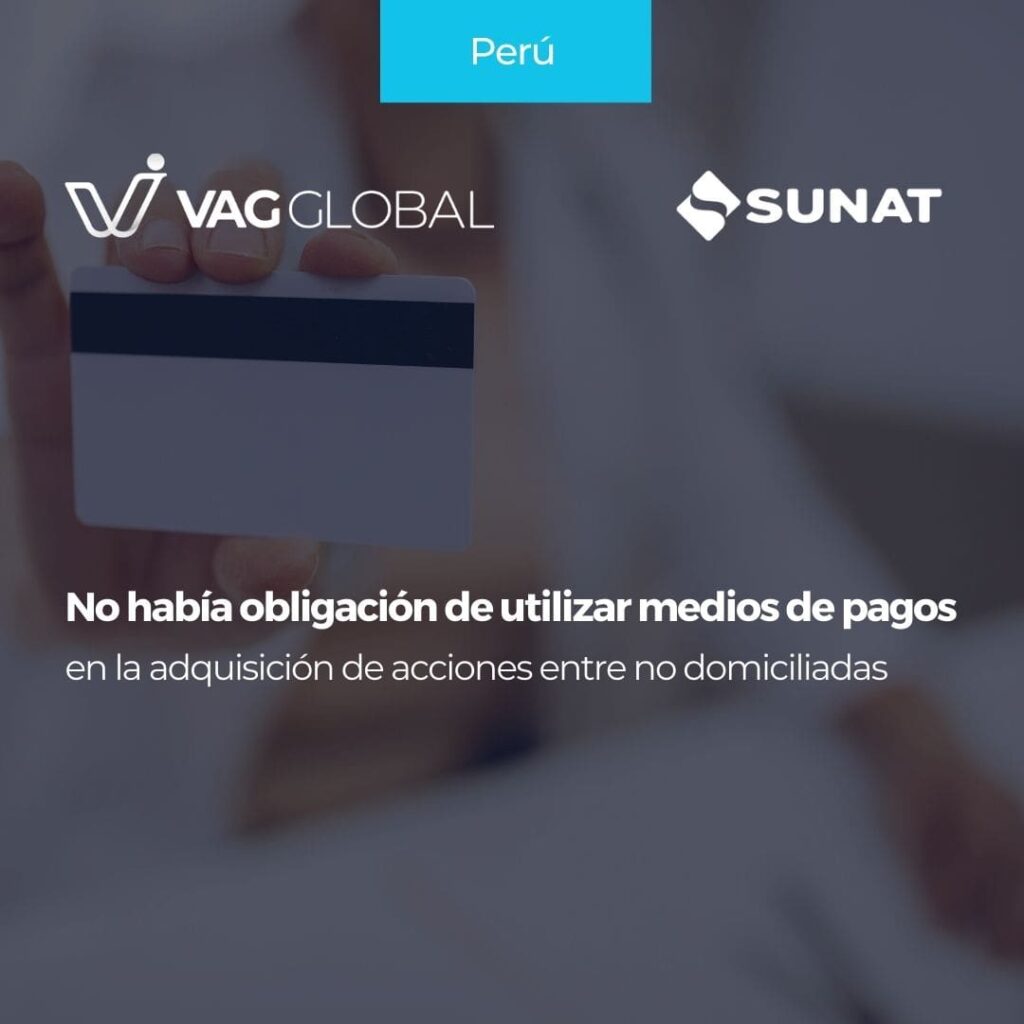 Through Report No. 04-2022, SUNAT establishes that prior to the entry into force of paragraph e) of Article 10 of the LIR, it was not mandatory to use means of payment in the acquisition of shares between non-domiciled legal entities, where one of them is the owner of a legal entity domiciled in Peru, in order to support the computable cost of such shares.

Pursuant to Article 6 of the Income Tax Law, in the case of taxpayers not domiciled in the country, branches, agencies or other permanent establishments of sole proprietorships, corporations and entities of any nature incorporated abroad referred to in Article 7 e), the tax is levied only on taxable income from Peruvian sources.

Among the Peruvian source income, described in articles 9, 10 and 11 of the LIR, we find article 10, paragraph e), which considers as Peruvian source income those obtained from the indirect sale of shares or participations representing the capital of legal entities domiciled in the country.

In this regard, as of January 1, 20121, the income obtained by non-domiciled individuals as a result of the indirect disposal of shares, which meet the conditions set forth in the LIR, is subject to Peruvian income tax as it is considered Peruvian source income; whereas prior to that date, the income generated by such individuals from such disposals was not subject to income tax.

3. Banking and use of payment methods

It should be borne in mind that the verification of the means of payment used must be made when the payment corresponding to the transaction that generated the obligation is made, which means that the moment that determines whether the obligation to use the means of payment provided for in the Banking Law is enforceable or not for tax purposes is the moment when the payment is made.

Therefore, taking into account that the payment made by the non-domiciled company for the acquisition of shares issued by a foreign company that in turn is the owner of a domiciled legal entity occurs before the income generated by the indirect disposal of shares is considered as Peruvian source income under the LIR and considering that such acquisition, the holding of the shares or their disposal were not subject to taxation in the country at that time (time of payment), such company was not obliged to use the means of payment regulated by the Banking Law.

The non-domiciled legal entity that acquired shares issued by another non-domiciled company that in turn is the owner of a legal entity domiciled in Peru and made the payment before the entry into force of paragraph e) of Article 10 of the Income Tax Law, was not obliged to use means of payment, as provided by Supreme Decree No. 150- 2007-EF, for the referred acquisition of shares, in order to support the computable cost of these on the occasion of their subsequent disposal.