Does the IGV paid for the operations used in the replacement of a damaged fixed asset constitute a tax credit? 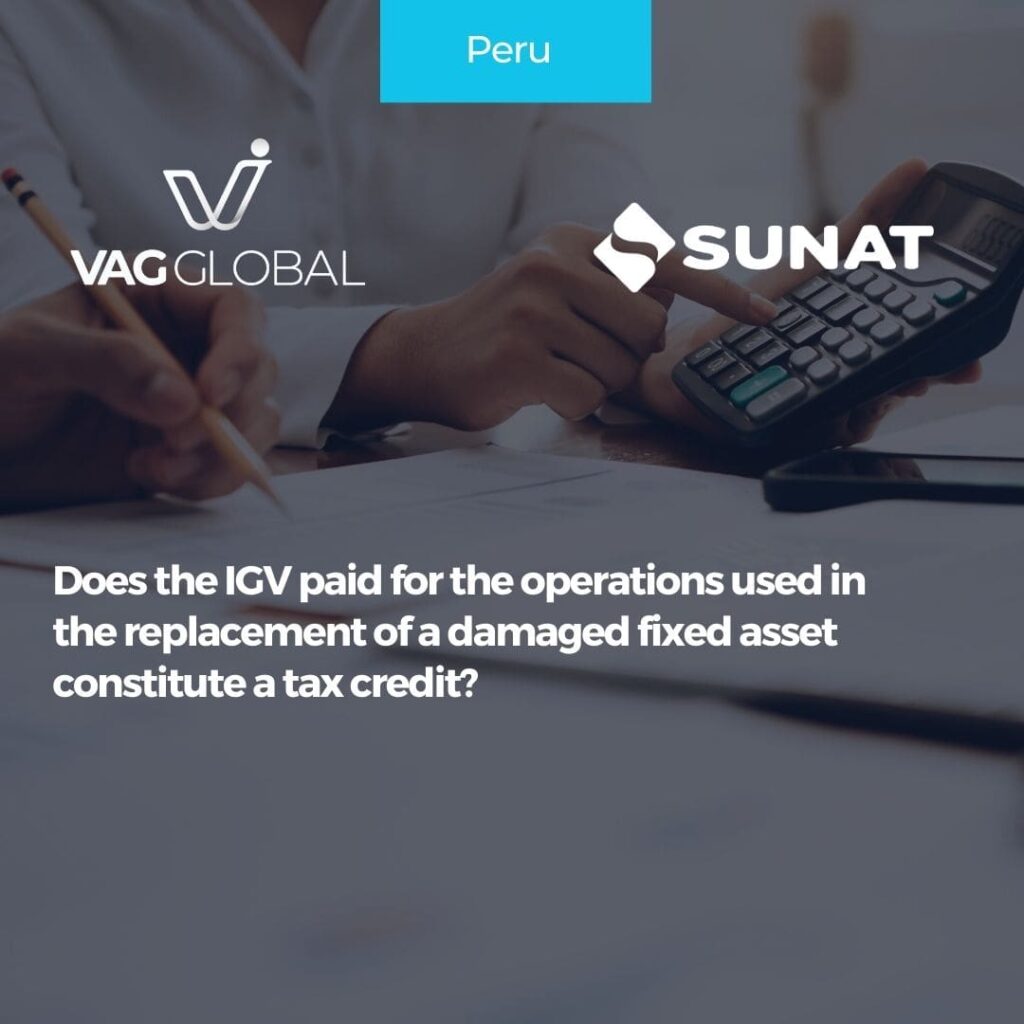 Report No. 85-2021-SUNAT/7T0000 asks whether the IGV (Impuesto General a las Ventas – General Sales Tax/VAT) paid on the acquisition of goods, services, and construction contracts, or that paid on the importation of the good or the use in the country of services rendered by non-domiciled persons, used to replace the damaged fixed assets, which originated from the amount paid by an insurance company as indemnification, constitutes a tax credit.

Article 18 of the IGV Law states that the tax credit is constituted by the IGV recorded separately in the payment voucher, which supports the operations taxed with the mentioned tax.

The aforementioned article also states that tax credits are only granted when the following requirements are met:

In this regard, to determine whether the IGV paid for the operations described above entitle the tax credit, it is necessary to verify whether they can be considered an expense or cost of the company for the premise of the consultation, according to the Income Tax Law.

Article 3(b) of the Income Tax Law states that compensation for the total or partial replacement of one of the company’s assets over the computable cost of such asset is subject to income tax unless the conditions for the total tax exemption of such amounts are provided for in its Regulations are met.

In this regard, paragraph f) of Article 1 of the aforementioned Regulation establishes that in the cases mentioned in the preceding paragraph, the amount of the indemnity that exceeds the computable cost of the asset and is used for the total or partial replacement of said asset will not be computed as gain.

On the other hand, paragraph d) of Article 37 of the Income Tax Law provides that extraordinary losses suffered by fortuitous event or force majeure in taxable income-producing assets will be deductible expenses, to the extent that such losses are not covered by indemnities or insurance and provided that the tort has been judicially proven or shown as useless to exercise the corresponding legal action.

Thus, it can be stated that, according to the Income Tax Law and its regulations, although extraordinary losses covered by indemnities or insurance are not deductible to determine gross income, when such indemnities are used entirely to replace, totally or partially, an asset of the company, they will not be subject to the aforementioned tax.

Finally, paragraph 21.6 of Article 21 of the Income Tax Law states that in the case of indemnifications destined to replace, totally or partially, an asset of the company’s assets, the computable cost is the one corresponding to the replaced asset, adding only the additional amount invested by the company if the replacement cost exceeds the amount of the indemnification received.

It is concluded that the IGV paid on the acquisition of goods, services, and construction contracts, or that paid on the importation of the good or the occasion of the use in the country of services rendered by non-domiciled persons, made with the amount delivered by an insurance company as indemnification for the replacement of the damaged fixed asset, does not constitute a tax credit.